Srinagar: Four terrorists of Lashkar e Toiaba (LeT) were arrested for the grenade attack on the house of GoaChronicle journalist whose mother is a Sarpanch at Shrakwara Kreeri ten days ago, police said in a press conference today.

A police officer told that on August 22, about 2100 hours, a telephonic call was received by Police Station Kreeri regarding a blast-like sound heard from village Shrakwara Kreeri. 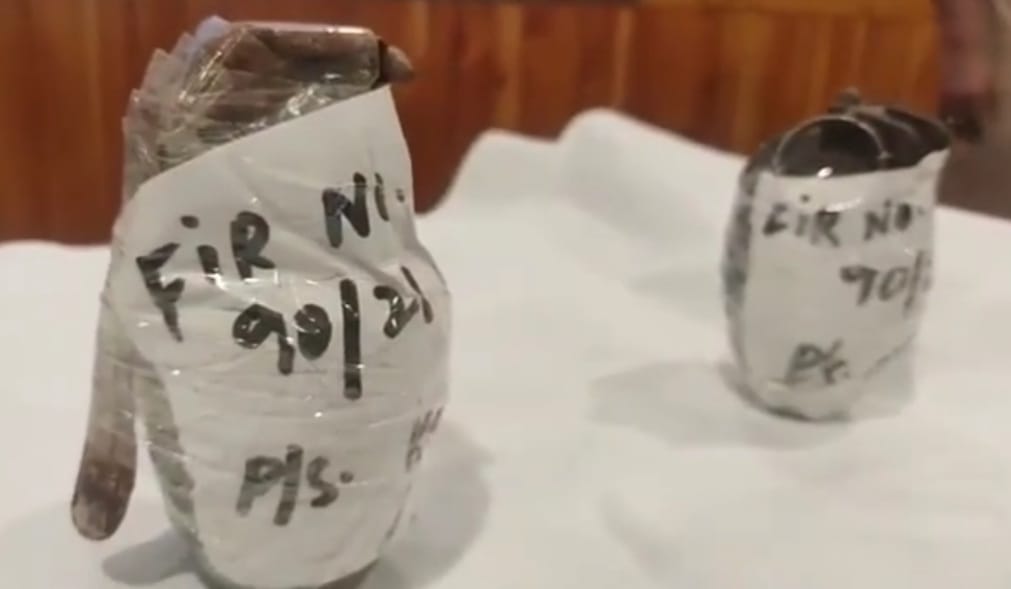 Accordingly, he said, parties of Baramulla Police, 52 RR, and 176 Bn CRPF rushed towards the village.

“During the course of verification, it came to fore that a grenade was lobbed towards the police guard/house of sarpanch namely Narinder Kour wife of Daljeet Singh and Mother of GoaChronicle Journalist Amanjeet Singh of Shrakwara Kreeri which caused some damages to window panes and vehicle Maruti-800, as the lever of the exploded grenade was found in the kitchen garden.”

Accordingly, a case FIR under sections of explosive substances Act and UA (P) Act 1967 was registered in Police Station Kreeri and investigation set into motion, he said.

During the process of investigation, many suspects were called for questioning, and on the basis of technical analysis, CCTV footage, and other pieces of evidence, it came to surface that suspects namely Mohammad Saleem Khan son of Ghulam Hassan Khan of the new colony Shrakwara and Sajad Ahmed Mir son of killed terrorist Ali Mohammad Mir of Mir Mohalla Saloosa are involved and they were later arrested.

During their interrogation, he said, it came to the fore that both the suspects were working as OGWs of LeT outfit at the behest of Pakistan-based handler and LeT terrorist of its offshoot The Resistance Front (TRF) namely Ali Bhai.

“It is pertinent to mention here that both the accused persons were in contact with LeT terrorist Hilal Sheikh and Usman (foreigner) on whose instructions, they obtained grenade from Batmaloo Srinagar,” the officer told ‘adding’ “Two other associates Bilal Ahmad Sheikh son of Mohammad Maqbool Sheikh of Saloosa and Naseer Ahmad Dar son of Abdul Majeed Dar of Najibhat assisted the accused persons in the commission of crime who were also arrested.”

He said two hand grenades and 100 grams of “Charas-like” substance have been recovered from the accused persons.

So far the Indian security forces have eliminated 5 terrorists of the TRF since claiming to be responsible for the attack on the home of the GoaChronicle journalist with the intent to target his mother the Sarpanch.