The New York Times carried an advertisement that was paid for by the Justice for Migrant Women and signed by 76 organisations claiming to be concerned farmers, activists and citizens of the world. The advertisement also carries a website – www.solidaritywithindianfarmers.com.

‘We – Farmers, Activists and Citizens of the World – Stand in Solidarity with Farmers in India protesting to protect their livelihood’.

The advertisement in the New York Times features 76 organisations. However, in the list of farmers, activists and citizens of the world is the questionable organisation – Council of American – Islamic Relations (CAIR).

Now CAIR along with Islamic Circle of North America (ICNA) have been strong backers to the Stand With Kashmir global advocacy, which included billboards in the US. The aim of CAIR and ICNA is to attack the Indian government’s decision on Abrogation of Article 370 and to create global awareness on the atrocities to Muslims in Kashmir done by the Indian government through the Indian Armed Forces. 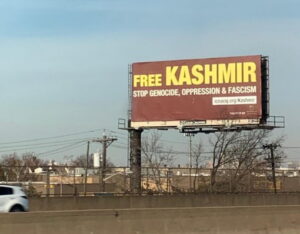 CAIR support to ‘Stand With Kashmir’ was out in the open when it had publicized the emergency protest in Washington, D.C on August 6, 2019 on its Facebook page.

At the ‘Stand With Kashmir’ protest held at Washington, D.C., Nihad Awad, Co-Founder of CAIR spoke and expressed his displeasure on the Indian government’s decision of the Abrogation of Article 370. Below is his speech that was uploaded on Facebook.

Not known to many, but it worth noting that CAIR receives most of its funding from Qatar and Turkey.  Turkey had opposed the Indian government decision of the Abrogation of Article 370 and has also thrown its weight to support Pakistan on the issue.

CAIR was included in the list of groups identified as the Palestine Committee. The committee created by the Muslim Brotherhood, was charged with supporting Hamas financially and politically in the US, according to InvestigateProject.org.

Let me share with you an investigative report by Daily Caller that we accessed through the Middle East Forum and Islamic Watch:

“Plentiful legal evidence, acquired in the course of a lawsuit—plus CAIR’s own official filing documents to the Department of Consumer and Regulatory Affairs (DCRA) and IRS—make clear that CAIR has engaged in a thinly-disguised money laundering operation,” David Reaboi, vice president for strategic communications at the Center for Security Policy, told The Daily Caller.

“In addition to violating its 501(c)(3) regulations, CAIR’s undisclosed and hidden foreign donations amount to violation of the Foreign Agent Registration Act as well,” Reaboi continued.

CAIR formed in 1994 by filing with the Department of Consumer and Regulatory Affairs (DCRA) and soon after obtained 501(c)(4) status from the IRS as a non-profit lobbying organization.

The year before, the organization’s two founders — current Executive Director Nihad Awad and Omar Ahmad — were captured on FBI wiretaps of high-level Hamas leaders, discussing the need for a public relations effort supporting that group. On the recorded meetings and phone calls, the terrorist group was referred to, in code, as “Samah,” as the participants made covert efforts to fund and promote its activities in the West Bank and the Gaza Strip to the tune of millions of dollars.

At the time, both CAIR founders Awad and Ahmad served in leadership positions in a key piece of the Muslim Brotherhood’s network in the United States, the Islamic Association for Palestine (IAP), which was founded by Hamas political director Mousa Abu Marzook before he was deported from the United States.

In 2008 both the IAP and CAIR founder Ahmad were designated unindicted co-conspirators in the largest terrorism funding trial in American history, US vs. Holy Land Foundation.

CAIR and other Islamic groups sought unsuccessfully to petition the government to clear its name. In 2009, U.S. District Court Judge Jorge Solis rejected their appeal and maintained their status as unindicted coconspirators, noting, “the government has produced ample evidence to establish the associations of CAIR…with NAIT [North American Islamic Trust], the Islamic Association for Palestine, and with Hamas.”

Despite the group’s ties to Hamas and its court-documented origins as part the Muslim Brotherhood’s network in America, CAIR officials — including Awad, its communications director Ibrahim Hooper, and others — have appeared in media, been praised by politicians and continued to claim to represent the American Muslim community.”

Now that we have put out questionable links on CAIR to Islamic radical organisations and its effort to lead advocacy against India internationally on Kashmir and the Indian government’s decision on Abrogation of Article 370. Let me throw light on George Soros and the Open Society links to CAIR.

Here is the entire list of 265 grants that the Council on American Islamic Relations (CAIR) received from non-Muslim foundations that we accessed from the InvestigativeProject.org report:

In fact in the Open Society Foundations – Community Against Hate campaign, the George Soros NGO has worked with CAIR and its different branches in the US.

So the moot question is what would an Islamic radical organisation known for its links with the Hamas advocating anti-India sentiments for Abrogation of Article 370 by the Narendra Modi-led Indian government and an organisation that is linked directly to Open Society Foundation of George Soros through financial funds and works have to do with the Farmers Protest in India that it is one of the signatories to an advertisement in the New York Times.

Interestingly Open Society Foundation is also linked to Sikh Coalition that is fanning the protest internationally particularly in the US against the Indian farm laws.

The answer to my mind is simple: Promoters of anarchy and Islamic radicals have united against India.