Chennai: The All India Christian Forum (AICF) has condemned the sexual torture and brutality committed by the accused policemen in the custodial death of Jayaraj and Bennix in Tuticorin, Tamil Nadu.

Demanding for justice over the custodial death, R Joseph Kennedy, General Secretary, AICF stated, “Our protectors have turned out to be our violators.The inhuman acts of the policemen behind the brutality meted out to Jayaraj and Bennix is shocking and repulsive. They must be arrested. They must be dealt with sternly by law of the land as criminals, because that is exactly what those police officers are: criminals, who sexually tortured Jayaraj and Bennix that led to their custodial death.”

Kennedy further added, “AICF condemns the action of those police officers in the Tamil Nadu Police who bring shame to the entire police force in the state and to us as a country. It is only when the community has confidence in the integrity and capacity of the law enforcement that the community is governed by the rule of law.  AICF Members urge the Tamil Nadu government to ensure that justice is served to the family of Jayaraj and Bennix. 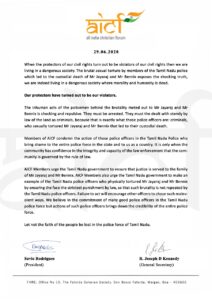