Mumbai: Maharashtra Home Minister Anil Deshmukh has written to the Centre demanding a ban on the broadcast of the film Muhammad – The Messenger of God on digital platforms following a complaint by a city-based organization Raza Academy.

Deshmukh has sought the ban on the film under the Information Technology Act to ensure the law and order situation is not affected in the state, said an official statement issued on Wednesday.

Raza Academy had submitted the complaint to the states cyber cell, seeking a ban on the films broadcast on digital platforms, it said. The statement does not specify details of the Academy’s complaint.

Following this, Deshmukh wrote a letter to the central government seeking a ban on the films broadcast under the provisions of the IT Act to ensure the law and order situation is not affected in the state, the statement said. The film is to be broadcast on July 21, it said.

‘Muhammad – The Meesenger of God’ is a 2015 Iranian Islamic film directed by Majid Majidi. The film is set in the sixth century where the story revolves around the childhood of the Islamic prophet Muhammad. 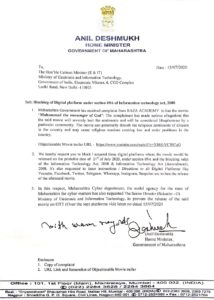