London:  The Lancet has refuted claims attributed to the medical journal by US President Donald Trump in a letter to the Director-General of the World Health Organisation (WHO), Dr Tedros Adhanom Ghebreyesus.

In his letter the Donald Trump stated, that WHO ignored “credible reports of the virus spreading in Wuhan in early December 2019 or even earlier, including reports from the Lancet medical journal”.

In response to that letter, The Lancet has issued a statement. It said:

On May 18, 2020, President Donald Trump wrote to the Director-General of the World Health Organization and Tedros Adhanom Ghebreyesus. In that letter, President Trump reports the results of a review his administration conducted into WHO’s response to the COVIO-19 pandemic.

President Trump wrote that ‘we know the following’ and the first allegation he makes is that WHO “consistently ignored credible reports of the virus spreading in Wuhan in early December 2019 or even earlier, including reports from the Lancet medical journal.

The World Health Organization failed to independently investigate credible reports that conflicted directly with the Chinese government’s official accounts, even those that came from sources within Wuhan itself. “

This statement is factually incorrect. The Lancet published no report in December, 2019, referring to a virus or outbreak in Wuhan or anywhere else in China.

The first reports the journal published were on January 24, 2020. In a paper by Chaolin Huang and colleagues, the first 41 patients from Wuhan with COVID-19 were described (1). The scientists and physicians who led this study were all from Chinese institutions. They worked with us to quickly make information about this new epidemic outbreak and the disease it caused fully and freely available to an international audience.

A second paper (2), from Jasper Chan and colleagues, also published on January 24, described the first scientific evidence confirming person-to-person transmission of the new virus. This report included scientists and physicians from Hong Kong and mainland China.

The allegations levelled against WHO in President Trump’s letter are serious and damaging to efforts to strengthen intemational cooperation to control this pandemic. It is essential that any review of the global response is based on a factually accurate account of what took place in. 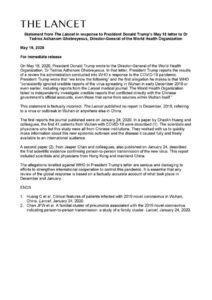