Chennai: Even though the Bharat Mata statue at the Issaki Amman Temple in Kanyakumari has been uncovered on orders of the Collector, after being covered over a frivolous complaint, a Christian Group All India Christian Development Army (AICDA)  filed a complaint with the District Collector.

In the complaint the President of AICDA, Theodore Sam, has mooted that the statue has come up during the period of the lockdown suddenly with an ulterior motive to disrupt communal harmony.

The AICDA has petitioned the District Collector to remove the Bharat Mata statue because it could lead to future communal strife in the area.

The Bharat Mata statue at the Issaki Amman temple faced opposition last week, when a complaint egged on by Christian groups was filed and the statue was covered.

In his petition to the district collector, T Muthukumar, owner of the Temple, said, “The statue was on our Patta land without affecting public peace or law and order. It did not create any communal clashes. My ancestors built the temple, and we have been maintaining the same for generations.” 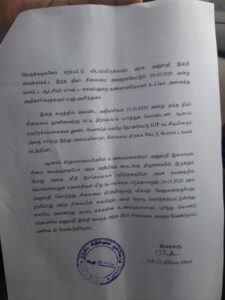 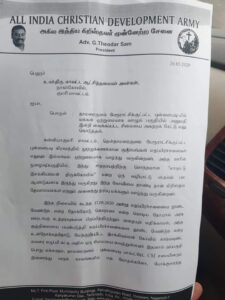