The coronavirus pandemic has infected over 1.9 million people and has reported 119, 785 deaths globally.

The Taiwan Centers for Disease Control (Taiwan CDC) through a letter had warned the World Health Organisation (WHO) in the last week of December 2019 about the human-to-human transmission of the Coronavirus.

The Director-General of WHO, Dr Tedros Adhanom Ghebreyesus denied that Taiwan ever alerted WHO to the possibility of human-to-human transmission. WHO stated that it did receive an email from Taiwan on December 31, 2019 which mentioned, “Press reports of cases of atypical pneumonia in Wuhan and that Wuhan authorities believed “it was not SARS”, or Severe Acute Respiratory Syndrome which killed 774 people in 2002 and 2003. There was no mention in this mail of human-to-human transmission.”

In response to WHO’s denial that Taiwan ever alerted it to the possibility of human-to-human transmission of COVID-19, the Central Epidemic Command Center makes the following statement today, April 11:

Here is a tweet of Ministry of Health and Welfare, Republic of China (Taiwan) 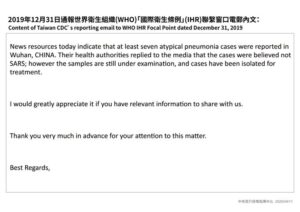 The closeness of Dr Tedros with China is no longer a secret:

The reason W.H.O takes a soft stand towards China is because China’s W.H.O contributions have reportedly grown to USD 86 million – a 52 per cent rise in 2019. Even the voluntary contributions has increased from USD 8.7 million to USD 10 million in 2019, as reported in certain sections of media.

The reason Dr Tedros takes of soft-stand towards China is because reportedly China backed his election campaign to the post of Director-General of W.H.O.